“In collaboration with Pacific Plate Brewery, GCF is slated to present the third installation in a line of conservation beers. The #TallBlonde Hefeweizen will be released August 31st in San Diego, CA during the ‘Wild About Giraffe’ event.”

In our continued efforts to protect wildlife, we are presenting the #TallBlonde (Giraffe) Hefeweizen. Our brewing partners at Pacific Plate Brewing Company, home to Monrovia, Ca, have worked with us to make a beer dedicated to the protection of wild giraffe and their home habitats.

This is third beer in our conservation series, after the #WhiteRhinoIPA and #EarthShakerStout (Elephant). With every “cheers” and clinked glass, you can help raise awareness and funds for some of Africa’s most iconic species that are facing a grim future due to poaching and habitat loss.

Giraffe are in serious trouble, facing what many wildlife experts call a “silent extinction.” This silent extinction is caused by a simple lack in scientific tracking of populations size, habitat loss and monitoring of poaching statistics. From an observational level, we know, since 1999, the global population of giraffe has declined from about 140,000 animals to under 80,000 animals. That’s more than a 40% population decline in 15 years.  If this declining population trend continues, it may warrant listing the giraffe under a higher level category of being at threat. Coupled with the fact that #Giraffe are not currently protected under CITES, is very concerning.

Help Global Conservation Force fight against poaching and fight for the survival of Giraffe!

Join us at the “Wild About Giraffe” event at Intergalactic Brewery in Mira Mesa, CA., August 31st from 4pm-8pm.

We will be releasing the #TallBlonde hefewezein in support of giraffe conservation efforts. You can also donate to Global Conservation Force and help us assist multiple anti-poaching units with GCF customized patrol gear and specialized technology.

If you haven’t tuned into our Facebook page posts, or our mailing list info, we are prepping a full team sponsorship package for the Loisaba reserve in Kenya, launching this October. This sponsorship will cover 60 anti-poaching rangers with supplies and gear. In the past, we have helped areas with high giraffe poaching in Namanyuk, Kenya and the Reteti Elephant rescue and rehabilitation team by supplying them with surveillance technology and custom, lightweight, durable patrol gear. 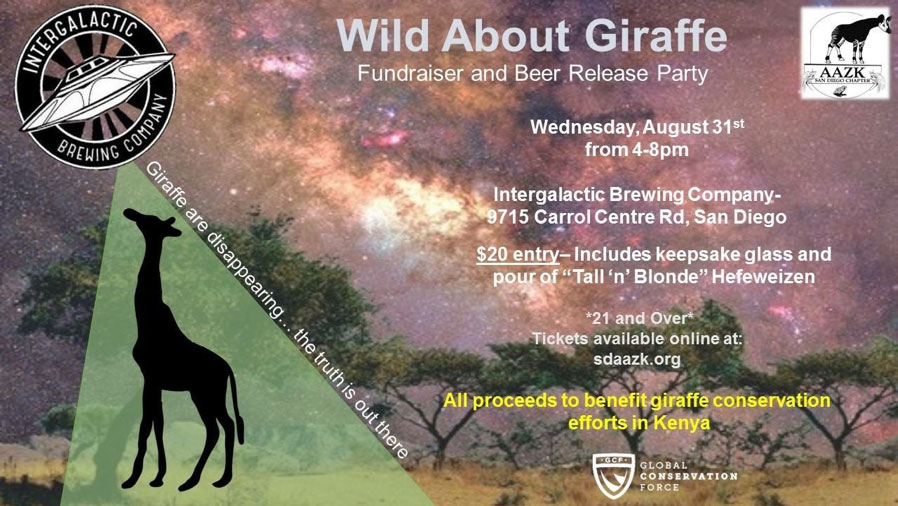 How can cryptocurrency and NFTs save endangered species?

December 16, 2021 by admin
DONATE NOW TO HELP FIGHT POACHING
Manage Cookie Consent
To provide the best experiences, we use technologies like cookies to store and/or access device information. Consenting to these technologies will allow us to process data such as browsing behavior or unique IDs on this site. Not consenting or withdrawing consent, may adversely affect certain features and functions.
Manage options Manage services Manage vendors Read more about these purposes
View preferences
{title} {title} {title}