The Effects of Litter on the Environment and Communities

The Effects of Litter on the Environment and Communities

In addition to being unsightly (Pandey, 1990), litter causes a plethora of environmental and social problems (Schultz et al., 2013).  When trash and pollutants are washed into storm drains, it flows into our waterways and is distributed into streams, rivers, lakes, and oceans (Stormwater Litter and Trash, n.d.; Roper & Parker, 2013; Corcoran et al., 2009).  This harms wildlife and degrades their habitats (Roper & Parker, 2013; Stormwater Litter and Trash, n.d.).  Eighty percent of marine pollution can be traced back to sources on land (Nellemann & Corcoran, 2006).  Marine organisms are affected by a variety of plastics by getting tangled in it as well as ingesting the plastic (Baird & Hooker, 2000; Blight & Burger, 1997; Corcoran et al., 2009; Mallory et al., 2006; Roper & Parker, 2013; Rothstein, 1973).  This is an on-going problem since plastics are continuously deposited on coastlines both from inland and marine sources (Williams and Tudor, 2001).  When marine life is exposed to toxins, death may not be imminent, but the toxins accumulate in the organism over its life span (Pearce, 1991).  In addition to environmental degradation caused by trash and pollution, there are also repercussions that people experience every day.  Some fish and seafood are unsafe to eat, beaches are closed to public access and stormwater drains are clogged with trash and debris which leads to broken pipes and neighborhood floods (Stormwater Litter and Trash, n.d.). The list of social problems caused by litter and trash is also extensive.  Litter creates safety, fire, and a variety of human health hazards because of the organisms attracted to it (bacteria, rats, roaches, and mosquitoes), (Schultz et al., 2013).  Many studies have shown that when litter already exists, people are more likely to continue littering in that same area (Cope et al., 1993; Finnie, 1973; Keizer et al., 2008; Schultz, et al, 2013).  Similarly, if cigarette litter is allowed to accumulate, it may inadvertently create a social norm, implying that it is acceptable behavior to litter cigarette butts (Cope et al., 1993).  When litter exists, some people perceive there to be more crime in the area compared to a place that does not have litter (Roper and Parker, 2013; Stafford and Pettersson, 2009).  Researchers are repeatedly finding that litter actually increases crime (Brown et al., 2004; Keizer, et al., 2008). In residential areas, litter has been found to decrease property value and in commercial areas, it decreases customers and reduces sales (National Association of Home Builders, 2009; Skogan, 1990).  Finally, litter is expensive to clean up, costing the United States about eleven billion dollars annually (Roper & Parker, 2013; MSW Consultants, 2009).

Considering the extensive aesthetic, environmental, and social problems litter causes, conservationists need to determine how to change the global population’s attitudes and behaviors about litter.  When Hardin discusses the ‘tragedy of the commons’ (1968) he points out that people consistently do what is in their best interest.  People need to be convinced that cigarettes are not only litter but also toxic waste (Rath et al., 2012).  The public needs to believe that it is in their best interest to refrain from littering and maintain their property accordingly. 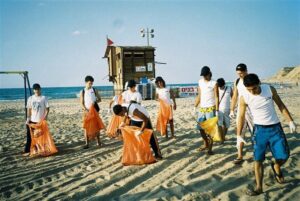 A trash pickup is not just about picking up litter.  There are frequently other issues that are discussed or that people may organically experience on their own.  A large group of people walking around a neighborhood picking up trash raises awareness about littering.  Ideally, community members seeing the trash pickup think about the issue and will “see” trash more in their daily lives.  This facilitates a scenario where people acknowledge its existence instead of ignoring it.  Getting people to realize the simple facts that they should not litter and that it’s OK to pick up trash can result in the proper disposal of trash and discouraging others from littering.  A problem as pervasive as litter is overwhelming when one person attempts to solve the problem individually.  If everyone took care of his or her own property (house, business, apartment building) it would be a lot cleaner, much faster.

Stormwater-Litter and Trash. (n.d.). Department of Public Works. Obtained on November 29, 2014 from: www.sandiegocounty.gov/dpw/watersheds/residential/litter

By admin in News & Updates, Rhinos on September 21, 2020
DONATE NOW TO HELP FIGHT POACHING
Manage Cookie Consent
To provide the best experiences, we use technologies like cookies to store and/or access device information. Consenting to these technologies will allow us to process data such as browsing behavior or unique IDs on this site. Not consenting or withdrawing consent, may adversely affect certain features and functions.
Manage options Manage services Manage vendors Read more about these purposes
View preferences
{title} {title} {title}