“The Saiga Antelope, Saiga tatarica, is listed as ‘Critically Endangered’ on the IUCN Red List of Threatened Species. Saigas have a distinctive appearance, with an unusual swollen nose that filters out airborne dust during the dry summer, and warms cold air before it enters the lungs during the winter. This species is found in isolated populations in south-eastern Europe, Central Asia and western Mongolia.

Despite once numbering over one million in the mid-1970s, intense hunting pressure has reduced the global population to some 50,000 individuals.” (Reference text – IUCN) 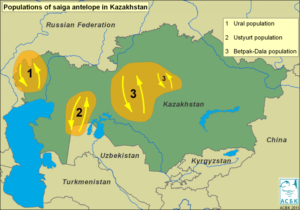 “The local nomadic people have for many generations sustainably used saiga meat and hide as part of their diet and culture, but nowadays saiga are primarily hunted for their translucent amber horn, which is sold for Chinese Traditional Medicine.

The fate of the saiga has been closely tied to the economic downfall of the USSR. The breakdown of the Soviet Union in 1991 resulted in the collapse of rural economies, unemployment and poverty. Saiga poaching provided an (illegal) alternative source of income and food. The border with China reopened in the late 1980s and demand for horn was high.

Only saiga males bear the precious horn, and as a result poachers aim to kill males. The number of adult males dropped dramatically. During the rut there were not enough males to mate with all the females, which led to a reproductive collapse. Recently however, some years have shown population growth and recovery, providing hope for the future.” (Reference text – Saiga Conservation Alliance)

Saiga antelope are currently facing a serious threat of extinction via poaching, and by consumer demand, which are the same as the demands for rhino horn. Global Conservation Force and the Saiga Conservation Alliance entered a project collaboration, in mid 2016, to work towards the better protection of Saiga antelope within their home ranges, specifically in Uzbekistan & Russia. Mike Veale, GCF President, met with E.J. Milner-Gulland, SCA Chair, at Scripps University on August 19th 2016 to further these plans and at that time we decided a trip to the saiga antelope  home ranges would be the best route of action for the start of our project.

In June 2017 Mike joined Saiga Conservation Alliance, in Uzbekistan, and was hosted by Elena Bykova, SCA Executive Secretary, and Sasha Esipov, SCA Steering Committee Member. The team took a plane from Tashkent to Nukus, then taking a car to the Saigachy Reserve. The team explored and assessed saiga antelope habitat at Lake Sudochye and surrounding areas.

The Saigachy Reserve in Karakalpakstan, Uzbekistan is 7,000 square kilometers with primarily flat land and short shrubs. This habitat is home to many unique species including the migratory saiga antelope. There is currently a ranger team in place to oversee the animals however their reach is somewhat limited due to fuel budgets.

The current strategic plan for reduction of poaching is to support the local communities with education outreach projects, and the rangers protecting the saiga antelope with added funds to the emergency fuel budget. Planning to reduce demand assisting with the expansion of education outreach in their range countries, and abroad, and pursuing wildlife trafficking issues where rhino horn trade, ivory, and saiga horn trade overlap.

The poachers are coming from four primary cities/rural areas within Uzbekistan. Poachers use illegal dirt bikes, motorcycles, and rifles to hunt the saiga. Due to vehicle restrictions the type of motorcycle commonly used stands out. The lack of enforcement in the rural towns allows the vehicles to still be operated. In the past collaboration with police and rangers targeting poachers by confiscating vehicles has proven to be effective. This collaboration relies heavily on current police officers interest in pursuing wildlife crimes which are not always their priority. Poachers are paid on size, age, and amount of Saiga horn. The fresher, the better, an informant noted that horns with “fresh” blood will sell for much more, compared to horns that have been dug up from the mass die off. The horn earns poachers anywhere from $100 – $400 per horn, but can be sold for up to $4,000 each on the market side. The market utilizations includes traditional medicines, teas, and full horns as part of status symbol displays.

There is lose accountability for the horns in China for areas where law enforcement is present. The Chinese caught with Saiga horn, or those claiming to be selling legal “old horn”, claim that the horns are from Soviet era. As we see in Africa, Chinese development projects in gas, energy, telecommunications, infrastructure, and road projects are commonly found nearby poaching areas.

Within Uzbekistan there is a market for saiga meat. The meat is viewed and valued as “natural” or “organic/healthy” meat as an alternative to chicken, beef, and fish. This trend is seen in the main cities of Uzbekistan where there is a more affluent class of people. Some locals do believe it is dishonorable to kill and hunt saiga, despite its touted medicinal values.

To support Saiga donate at www.globalconservationforce.org/donate

By admin in News & Updates on March 10, 2018
DONATE NOW TO HELP FIGHT POACHING
Manage Cookie Consent
To provide the best experiences, we use technologies like cookies to store and/or access device information. Consenting to these technologies will allow us to process data such as browsing behavior or unique IDs on this site. Not consenting or withdrawing consent, may adversely affect certain features and functions.
Manage options Manage services Manage vendors Read more about these purposes
View preferences
{title} {title} {title}