Drone deployments are proving to be a very important tool in the fight against poaching. We’ve modified 3DR’s Solo quad copter with added components, such as thermal vision for night time operations. During the day, our drones act as miniature support helicopters for ground anti-poaching teams. They can simultaneously stream live HD footage to the operator and can follow the anti-poaching unit, as well as be sent to waypoints, fly grids, and return “home,” all with hands free autopilot capabilities. Due to the popularity of the solo, aftermarket modifications, replacement parts and technical support are all easy to access. Ultimately, because of the support we have with our drone supplier, we’re able to focus on our primary jobs, keeping the anti-poaching units safe while they protect some of the world’s endangered species.

Currently, our drone program has two basic tactical techniques: one goal, which Founder/ President of Global Conservation Force, Mike Veale, refers to as a “Hive” or “swarm” technique, entails providing anti-poaching units (APUs) with multiple drones flying during their standard patrols, over the course of the day, all over the reserves. This provides extra visual coverage and acts as a presence patrol when the drones are noticed by any civilians. The “hive” technique also helps to save APUs time they need to investigate an issue, or provides live time and recordable footage for any incident unfolding on the reserve. When information about the drones is leaked back to a would-be rhino poacher, or the syndicate network, it provides an unpredictable element to their planning and an added obstacle to get past. Additionally, our drones have also been used to herd animals away from danger, or herd dangerous animals away from the ground teams. Not only this, but the drones are also commonly used on crime scenes since they are portable, essentially free to fly, can take high quality photos and can be placed anywhere in the sky with surgical precision to catalog the best CSI photos. 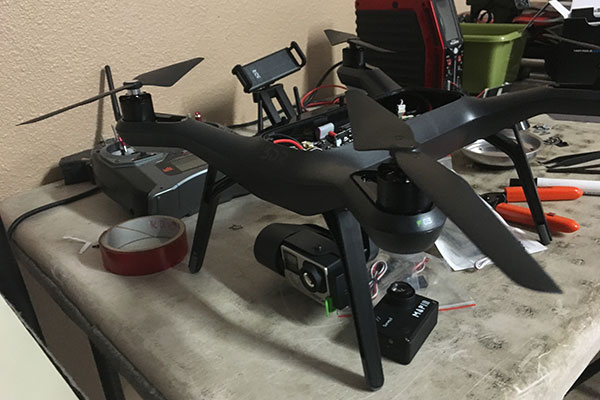 We are now expanding #OperationBateleur with the help of “Coast to Coast” drones out of Oceanside, Ca. Brian, the owner of Coast to Coast drones, has been able to utilize his connections, expertise and excellent technician crew to assist with all of our needs. With the assistance of Coast to Coast drones we’ve been able to work on sponsorship deals, discounted equipment purchases and have saved in labor costs. This has been helpful for the drone program because drones get expensive, very quickly.

As it stands, we are about to deploy another three anti-poaching drones to be utilized by anti-poaching units in the greater Kruger Region of South Africa. The efforts of these drones will be focused on the continued fight against rhino poaching. Once these drones are placed we will phase out the modified solos for the new platform created in collaboration with Coast to Coast drones. These new drones will fly for up to 50 mins, fly at speeds up to 60 mph and will be more portable and rugged. GCF and Coast to Coast have also come to a design decision for the large fixed wing, long distance drones. Once we have the budget to work on more drones we will hopefully be adding several of both types to the field. Special Thanks to our drone sponsors

World Rhino Day 2015 – An update from the field

September 22, 2015 by admin
DONATE NOW TO HELP FIGHT POACHING
Manage Cookie Consent
To provide the best experiences, we use technologies like cookies to store and/or access device information. Consenting to these technologies will allow us to process data such as browsing behavior or unique IDs on this site. Not consenting or withdrawing consent, may adversely affect certain features and functions.
Manage options Manage services Manage vendors Read more about these purposes
View preferences
{title} {title} {title}