Much like dogs have been brought into the poaching crisis for their specific skill set, horses are becoming a useful tool for anti-poaching units. Many active units are incorporating horses into their arsenal of tools to fight poaching. The horses have also been a game-changer for the rangers on patrol. On foot, a ranger can patrol 6 to 13 kilometers per 8-hour shift depending upon terrain. On horseback, the rangers can travel faster and farther than on foot, covering about 31 kilometers over a standard 5.5-hour patrol. Horses also have advantages over vehicle patrols – they can travel more quietly and with less ecological impact. They are able to follow the exact pathways of rhinos, elephants and other wildlife where vehicles can meet heavy challenges in rough or steep terrain. This is also beneficial for emergency veterinary procedures or management efforts, as it is possible to get much closer to an animal hiding in the brush to administer a tranquilizer dart.

Mounted rangers also have an added level of protection. For example, horses give the ranger a higher field of vision over tall savanna grasses. Wildlife reacts to mounted rangers as they would a new or interesting animal – with curiosity as opposed to fear. A horse can outrun most dangerous animals, while a ranger on foot must be extra diligent since they can’t get away as fast. The horses command respect and elicit a degree of fear and intimidation from the poachers. Being chased down and apprehended by a mounted ranger is a very real possibility and one that makes them think twice about the location they choose.
The advantages the horses bring to patrol come at a time when rhino poaching in the Eastern Cape is on the rise, despite an overall downward trend across South Africa beginning in 2014. The Eastern Cape saw a 58% increase in poaching in 2018 over the previous year. The increase of poaching incidents in the Eastern Cape indicates a change in the poachers’ targeted zones. 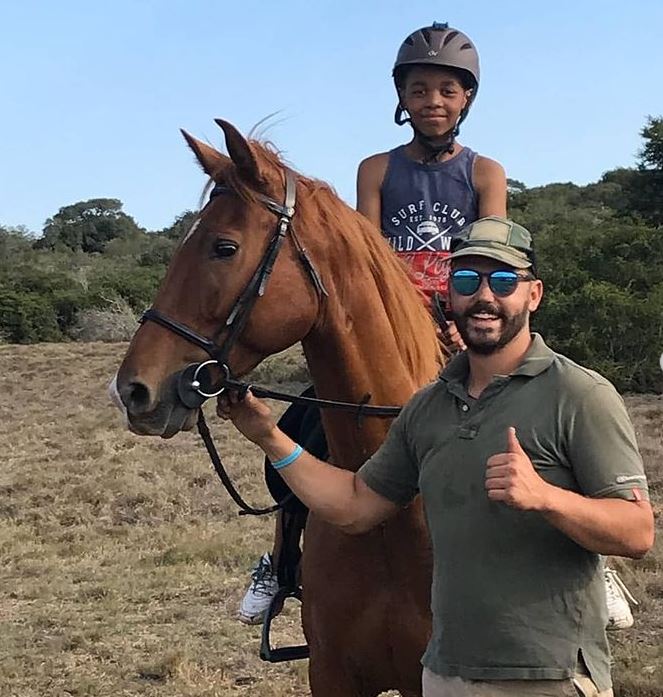 The horses have created an amazing opportunity for the rangers to connect with the community, acting as a gateway animal for the village to bond with and paving the road of trust and community involvement with the wildlife and the APU. Despite living in such close proximity, many of the local children have never seen a rhino, elephant, or giraffe. The horses are a beacon, especially to children, and naturally encourage people to come up and ask questions.

Explore our Story Map:  The Mounted Anti-Poaching Rangers of the Eastern Cape—Bridging the Gap Between Community and Conservation >>

Leave a reply Click here to cancel the reply

DONATE NOW TO HELP FIGHT POACHING
Manage Cookie Consent
To provide the best experiences, we use technologies like cookies to store and/or access device information. Consenting to these technologies will allow us to process data such as browsing behavior or unique IDs on this site. Not consenting or withdrawing consent, may adversely affect certain features and functions.
Manage options Manage services Manage vendors Read more about these purposes
View preferences
{title} {title} {title}