Have You Herd? World Elephant Day is Here!

Get ready for World Elephant Day on August 12, 2017, in celebration of the world’s largest land mammal! Global Conservation Force is celebrating both African and Asian elephants with brewery nights at Pacific Plate Brewery Taproom in LA on August 12th and Intergalactic Brewing Company in San Diego on August 13th. Join us in support of our conservation efforts to save these magnificent animals.

Elephants are not only social, intelligent, empathetic animals, but they are keystone species in their habitats. African elephants can migrate about 300 miles in a single year and they drastically alter the landscape along their routes. Not only do elephants excavate trees in open savannahs, create paths through forests, and dig water and mineral wells with their trunks, but they act as seed dispersers. An adult African elephant can consume 300 pounds of food per day and produce 100 pounds of feces per day. The feces act as a natural fertilizer for seeds, which are spread throughout the landscape as an elephant travels. Over 90 species of trees depend on elephants for germination.

Unfortunately, elephants’ migration routes are disrupted by habitat degradation, fenced farmland, war, roads, and settlements. African elephants were originally found in 37 sub-Saharan countries. However, burgeoning civilization has fragmented some herds and trapped other herds together in small protected areas. This leads to competition for food, water, and shade, and aggressive behavior between elephant herds. The habitat becomes overpopulated and further degrades, which threatens the survival of other species that live there. As a result, in 2008, the IUCN listed Asian elephants as Endangered and African elephants as Vulnerable. Both Asian and African elephants are protected under CITES Appendix 1. Unfortunately, this does not stop poachers from illegally hunting and selling elephant ivory. The Elephant Trade Information System has traced ivory trafficking to organized crime syndicates: profits from ivory sales fund weapons, civil conflicts, and terrorism.

Global Conservation Force defends the world’s remaining elephants by supporting anti-poaching units (APUs) with tactical gear, training, and technology that enables these units to better protect elephants and other imperiled species. This World Elephant Day, join GCF in our fight to protect elephants and learn more about saving these amazing animals! 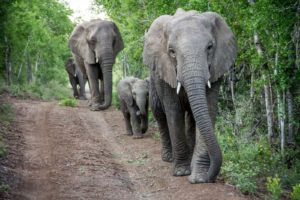 All photos taken by Kim Mcleod

We are extremely grateful to Kim and her work, she has given GCF donated access to utilize all her photos for educational purposes.

By admin in Events, News & Updates on July 31, 2017
DONATE NOW TO HELP FIGHT POACHING
Manage Cookie Consent
To provide the best experiences, we use technologies like cookies to store and/or access device information. Consenting to these technologies will allow us to process data such as browsing behavior or unique IDs on this site. Not consenting or withdrawing consent, may adversely affect certain features and functions.
Manage options Manage services Manage vendors Read more about these purposes
View preferences
{title} {title} {title}