Chris and John had just started a GCF sponsored combat medical field course for rangers in the Greater Kruger National Park, and the timing was perfect! Chris was honored with the privilege to hand out awards to the “Top of Class” and “Best Tracker.” Chris added to the awards by rewarding the ranger who received “Top in Class” with a GCF sponsored personal field emergency first aid kit (IFAK). 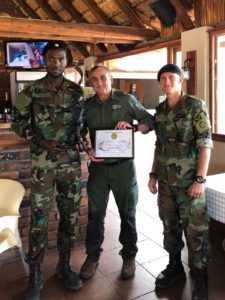 By admin in News & Updates on August 7, 2018
DONATE NOW TO HELP FIGHT POACHING
Manage Cookie Consent
To provide the best experiences, we use technologies like cookies to store and/or access device information. Consenting to these technologies will allow us to process data such as browsing behavior or unique IDs on this site. Not consenting or withdrawing consent, may adversely affect certain features and functions.
Manage options Manage services Manage vendors Read more about these purposes
View preferences
{title} {title} {title}