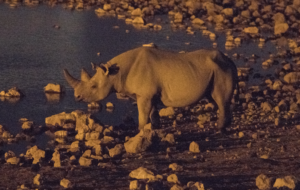 In December, Weston, GCF Awareness Triathlete, and I travelled to Namibia for a little over two weeks and spent the majority of our time between three primary groups. Above – Weston, GCF Awareness Triathlete, hands over sponsored gear to a couple of Anti-Poaching Rangers with Nyime APU

The first stop was with Nyime, an anti-poaching team that composes of several units across the country of Namibia. We spent our time with two of their units, exploring the land one of them patrols and observing their wild animals which included wildebeest, eland, springbok, and many other ungulates.

While with the teams we were able to to interview several of the rangers on a professional level, but also were able to get to know a couple on a more personal level. This allowed us to discuss with them on a level that allowed us to get to know more in depth the troubles, the needs, and the various issues that arise in their daily lives as anti-poaching rangers. It allowed us to hear personal stories and see how in Namibia most APU’s work together to form somewhat of a family, working together to protect the endangered species that call Namibia home. We learned many valuable stories while we visited the Nyime Anti-Poaching Unit. 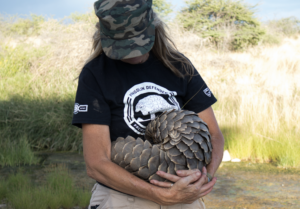 Above – Maria Diekmann holds a rescued pangolin she currently has in rehabilitation at the R.E.S.T. facility

The second group we visited was the Rare and Endangered Species Trust (REST). The first thing we did upon arriving was meet a meerkat, named Dexter, who was being rehabilitated. He was taken there after being confiscated from a tourist destination that was allowing guests to hold him.

Due to the nature of his first few months of life, it is not certain he will ever be fully “releasable” but will be able to live a semi-wild life at REST if that happens. He is being taught to forage on his own for food, dig tunnels, and while being socialized with humans (due to them being a highly social species) is also being encouraged to go out and explore on his own.

While at REST we joined “Honey Bun”, the pangolin, on her nightly walks. When she wakes up each day she is taken out into the bush and followed while she walks and forages naturally for all of her food. REST does not supplement her diet as they want her to be completely self sufficient in the hopes that she will one day be releasable to the wild.

During our visit REST also received an approximately one week old cape serotine bat and a pangolin that was confiscated by poachers. Due to our animal care backgrounds, Weston and I were able to be of immense help during this sudden intake of several high-risk rescues. We took turns throughout the day and night feeding and caring for the bat, which required food roughly every 45 minutes (especially at night since that is when they are most active naturally). This freed up Maria, the owner and founder of REST, to do 24/7 care and attention on the new pangolin, assessing her and evaluating her on whether she was releasable or would need some rehabilitation first. We learned that the pangolin was released, with a tracker, a couple days after we departed! 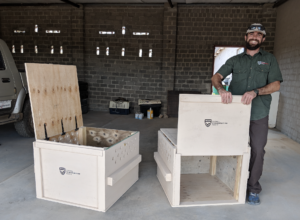 *Update* In early January 2018 the main water pump & generator were stolen from REST. GCF came to the rescue with emergency funding to get them operational again. Special ‘Thanks!’ to our donors for making this possible.

The third group was a private farm with several dozen white rhinos. At this reserve they are breeding to help repopulate the southern Africa with white rhino. While there we were able to meet with their anti-poaching team, their K9 APU, and chat with the primary caretaker of the rhinos. The APU took us along the routes they drive so that we could help check fencelines, see “spore” (tracks), from various rhinos, and learn their daily routines (or lack thereof, to keep poachers on their toes). We also were able to do an aerial patrol, scanning the entire property.

By admin in Mounted Anti Poaching Unit Project on January 14, 2018

By admin in Events, News & Updates on January 14, 2018
DONATE NOW TO HELP FIGHT POACHING
Manage Cookie Consent
To provide the best experiences, we use technologies like cookies to store and/or access device information. Consenting to these technologies will allow us to process data such as browsing behavior or unique IDs on this site. Not consenting or withdrawing consent, may adversely affect certain features and functions.
Manage options Manage services Manage vendors Read more about these purposes
View preferences
{title} {title} {title}