“Even the tallest should never have to stand alone, stand together with us to help protect and conserve the world’s tallest mammal, the Giraffe.” Forced to be Shorted

Giraffes were forced to stand up for themselves even more this year when  they were placed on “Vulnerable Species List” which is an upgrade from “Threatened “ in 2017. Thankfully, Global Conservation Force has been standing by their side and supporting the conservation of giraffes since 2013 . Over the past 30 years, giraffes have been tragically declining in  numbers due to encroachment from towns and cities and poaching. From 157,000 individuals in 1985, to 97,500 at last count in March 2018, populations have decreased nearly 40%. Currently GCF is supporting  212 rangers in units located in South Africa, Kenya Zambia, Eastern Cape, Limpopo that protect and conserve these tall blondes.  The Twiga Walinzi (Giraffe Guards) one of the newest units to Kenya which is standing tall besides these beautifully animals on the ground to learn more about their population and better understand their movements across the landscape. In addition, they can be liaisons to  land managers and communities to help them make more effective and efficient decision to maintain a co-existence between giraffe, humans and their livestock.

It is not just one species of giraffe that needs our help, there are nine species of giraffe in Africa all being threatened daily! Species such as the Thornicroft’s Giraffe have less then 550 individuals left in the population. Due to the fast declining numbers, Rangers have their hands full and need our help! They  are standing alone in very dangerous environments in Africa to protect and help save the giraffes from being poached and killed. They cannot do it alone; and they cannot do it without the proper gear and training. When you support with GCF, ,you allow us to give funds to the rangers for proper equipment, gear , and training. You can individually stand up tall and adopt a ranger from your home or work place and sponsor them to have the best chance to help these giraffes! Without the support from individuals like you, the giraffes future is shorter and shorter. 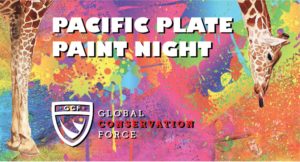 Help us protect giraffes in the wild by coming out to our World Giraffe Day Fundraiser June 21, at the Pacific Plate Taproom, from 5pm -8pm

Want a great way to spend the longest day of the year?  How about painting with a pint of your favorite beer, celebrating the world’s longest mammal! Stand tall with Global Conservation Force on  June 21, 2018 at our annual painting event at the Pacific Plate Brewery Taproom in Glendale. Pacific Plate bartenders and artist Ms. Peacock will guide you through a night filled with fun and conservation!  All materials and most importantly your first pint is included with your ticket purchase. Space is limited to 35 seats, so you’ll want to reserve your spot ASAP. 50% of ticket sales will be donated to Global Conservation Force to stand up for these tall beautiful blondes.

Can’t make it to the event?  You can stand by us in supporting the cause  by donating through our website at https://globalconservationforce.org/contact!

By admin in News & Updates on June 15, 2018
DONATE NOW TO HELP FIGHT POACHING
Manage Cookie Consent
To provide the best experiences, we use technologies like cookies to store and/or access device information. Consenting to these technologies will allow us to process data such as browsing behavior or unique IDs on this site. Not consenting or withdrawing consent, may adversely affect certain features and functions.
Manage options Manage services Manage vendors Read more about these purposes
View preferences
{title} {title} {title}